Well the dust has settled, and Im ready to write about the wonderful time had at ‘the most extravagant wayang-puppet carnival in the world!’ Over 40 companies played, with a big eclectic mix of traditional and contemporary work.  I was attending the festival  as production assistant for Sydney Puppet Company with Sue Wallace performing her beautiful childrens solo show ‘Nella’s Wings’. With no verbal language , the children’s audiences understood and enjoyed her every movement. 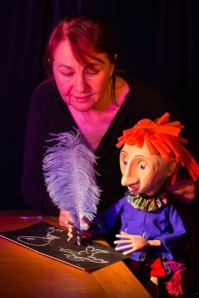 It was hard work getting to shows, as gridlock traffic was the norm, and the main theatre was a long way to the South of Jakarta. A huge heritage and cultural park, I arrived there by taxi and motorbike to meet up with the Puppet Tribe! After lunch, the Welcome Ceremony and Parade began, with beautiful costumes and traditional dancers and acrobats, as well as the International puppet companies. 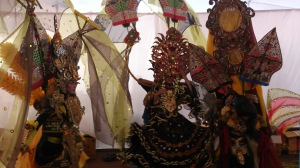 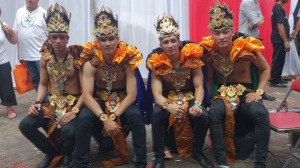 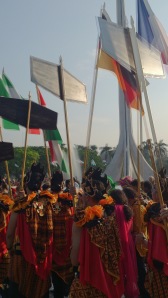 One of the most magical events of the festival was the opportunity to watch late night Wayang Kulit, at Monash with the best of Indonesia’s Dalangs. It was amazing to hear and see the full Gamelan orchestra, female singers in full dress and the full cast of Shadow puppet characters. I met & watched all the family: from 9 year old student Dalangs in training, to father to grandfather, passing down the alive and topical storytelling from each generation. The audience laughed and engaged in what must be the richest traditional puppetry still alive today. 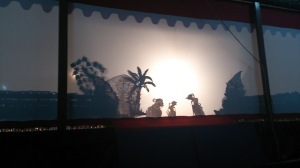 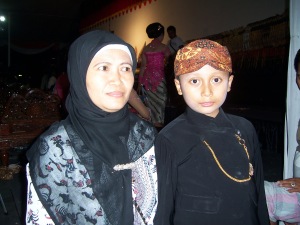 The Indonesian festival organisers did an amazing job pulling everything together, in very difficult circumstances at times. Nothing was a problem, and everything was done with a big smile to smooth things along. A special Gala night was held mid week, with traditional song and dance, and beautiful food. Hashim Djojohadikusumo, Chair of the Arsari  Djojohadikusumo Foundation made a moving speech concerning their charitable work against people trafficking, animal conservation and humanitarian aid relief.

Despite a few hiccups from losing my new phone in a Bluebird taxi and getting it back two days later(yes, they really are that reliable!), and getting stuck in a huge political demonstration, missing the days shows, I saw some great productions.

Standing out by far , was Paper Moon ‘s show ‘Mwa Thirika’ inspired by political turmoil  in 1965, the infamous “Year of Living Dangerously,” when thousands of Indonesians were jailed and murdered. Highly symbolic, great puppetry, powerful soundtrack and digital projections, a really moving and powerful production,and then a group of elderly ladies, survivors of that time were applauded after Ria Paper moon’s speech thanking the people who had given their stories of that time in research for the production.

For more information on the making see –

I was also fortunate to give a helping hand with Heather Henson’s Ibex Puppetry ‘Celebration of Flight’, and able to see behind the scenes and upclose outdoors, the amazing puppets and kites. Everyone making bird kites and flying them at the end of the show is magical audience engagement for all ages. 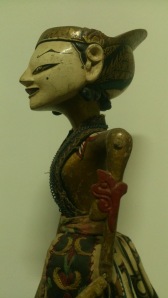 At the Wayang Museum, we were given a personal tour by Karen Smith, President of UNIMA’s Publication & Communication Commission and a learned student of Wayang Kulit. She also assists in UNESCO’s  efforts to document and conserve threatened puppetry and sacred performance. 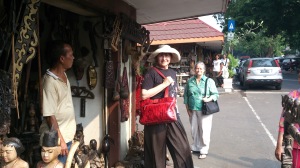 Of all the beautifully made and elaborately detailed puppets on display, the most interesting for me were the Wayang Mainman, practice puppets  woven with grass and also bamboo in the rural communities to teach children the stories of the Ramayana and Mahabarata. Relative to corn dollies and native american corn husk dolls, this tradition connects the land, the  food source, with the vital essence of storytelling. 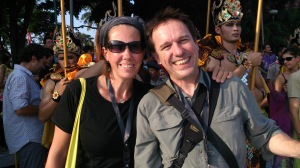